Figure is the surface effect of grain and color patterns produced by the natural patterns of growth or biological "defects" in the tree. Not all species produce figured wood, and the effects vary from log to log. Logs with strong, consistent figure often price higher. Some, like burls or bird's eye, are rare and are cut from a small part of the log which increases cost. 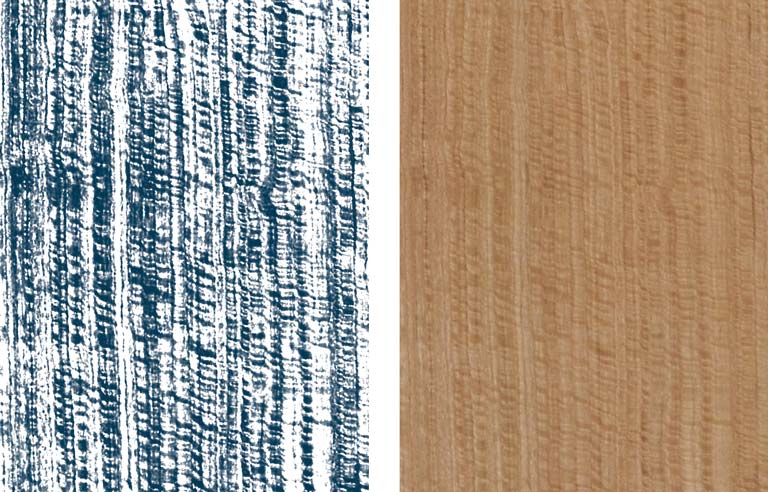 A small, tight cross marking mottle, similar in appearance to a bee's wing. It occurs most often in Satinwood and also occasionally in Eucalyptus and Mahogany. 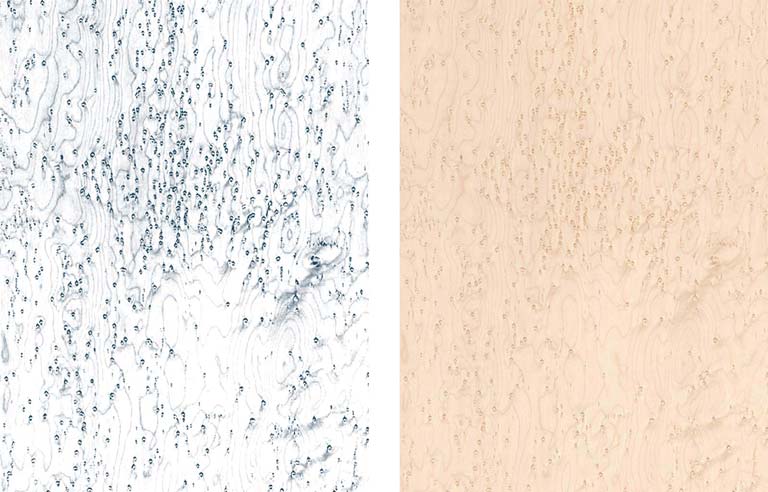 Bird's Eye is created by a depression in the trunk that distorts succeeding growth rings. This figure of small "eye" patterns occurs in a small percentage of trees. It is found most often in northern maples and is always rotary cut. 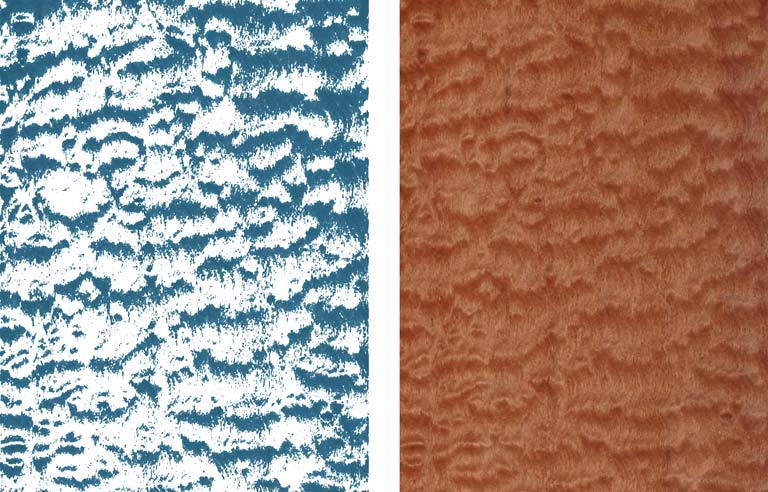 This figure appears as short, straight raised sections. Often described differently based on their shape and size: if oval they are called quilt figure, if longer, fiddleback, and if shorter, pomelle. Blister figure is the result of rotary cutting across an uneven contour of growth rings. 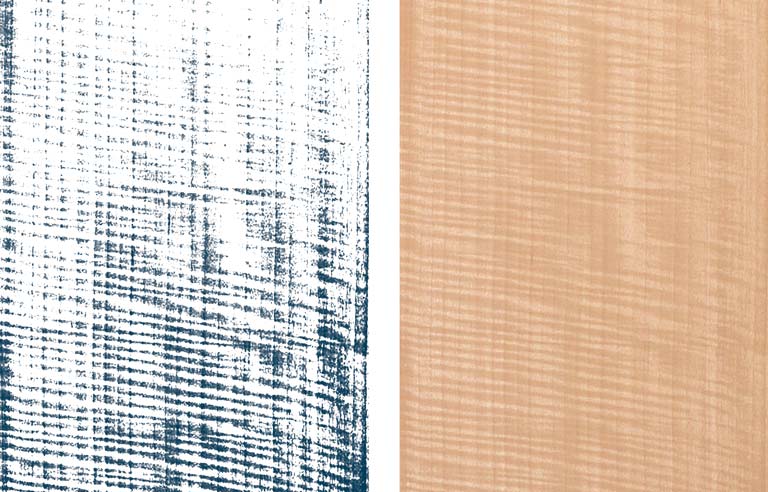 Broken Fiddleback is a fiddle type figure that does not cross the whole leaf – uniform in its appearance giving a broken figure affect. 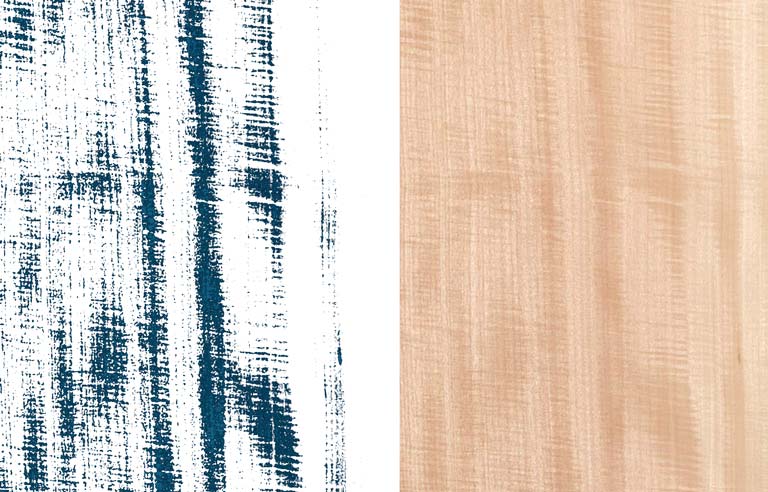 Broken Stripe figuring appears as a stripe running down under the surface and then out again, in a more or less "broken" pattern. It develops only in quarter-cut veneer, most commonly in the end wood of a flitch. 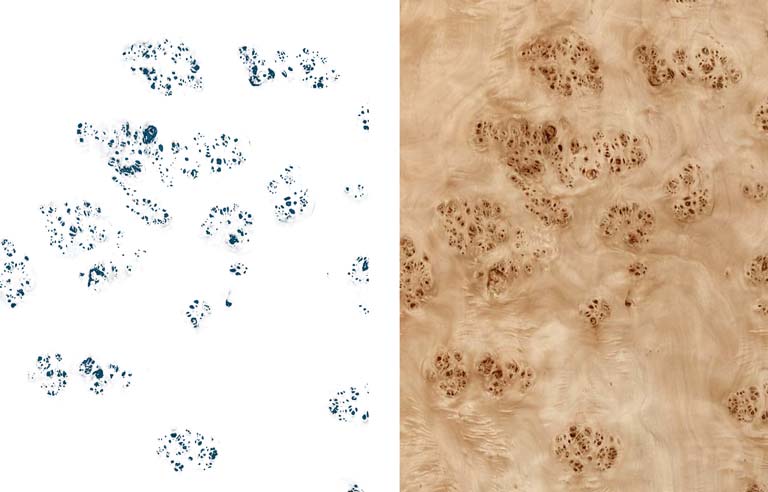 Burl appears as a close pattern of many small "eyes" surrounded by wildly distorted grain. It's the result of a wart-like growth on Walnut, Maple, Mappa, or Redwood trees, which are rotary cut to produce veneer. Burl leaves are generally smaller than other veneers. 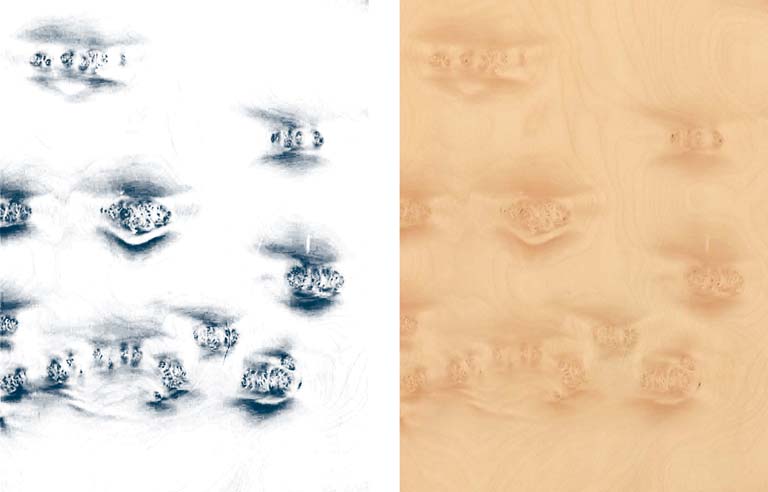 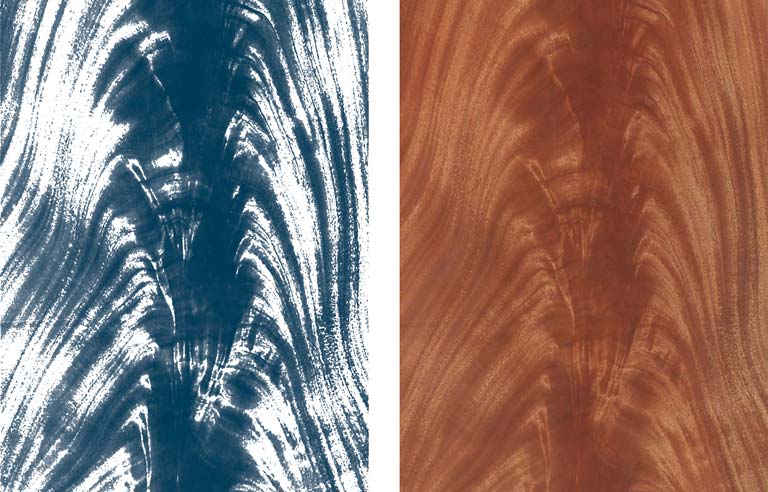 Crotch figuring is cut from the juncture of a tree's trunk and main branches. It has a wide range of appearance, including flame, plume, rooster tail, feather, or burning bush. Leaves are generally smaller. This figure is most common in Walnut and Mahogany. 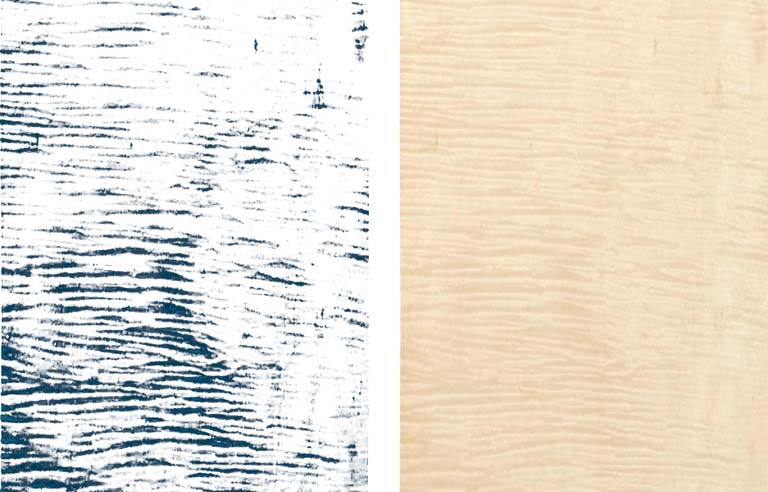 Curly figure appears as an undulating wave pattern produced when contortions in the grain reflect light differently. Many species develop a curly figure, but Maple is the most common. 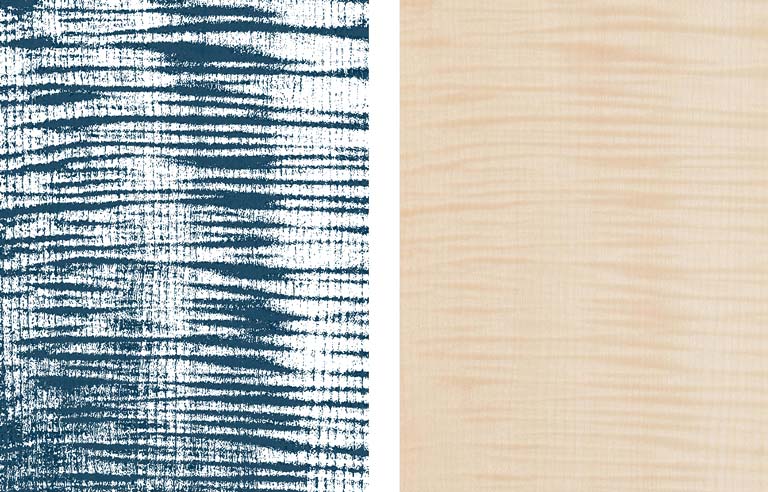 Fiddleback refers to a tight, fairly uniform, roll appearance across the grain. While other species produce fiddleback, it's most common in Maple, Mahogany, and Anegre and is named for the use of fiddleback maple in violin production. 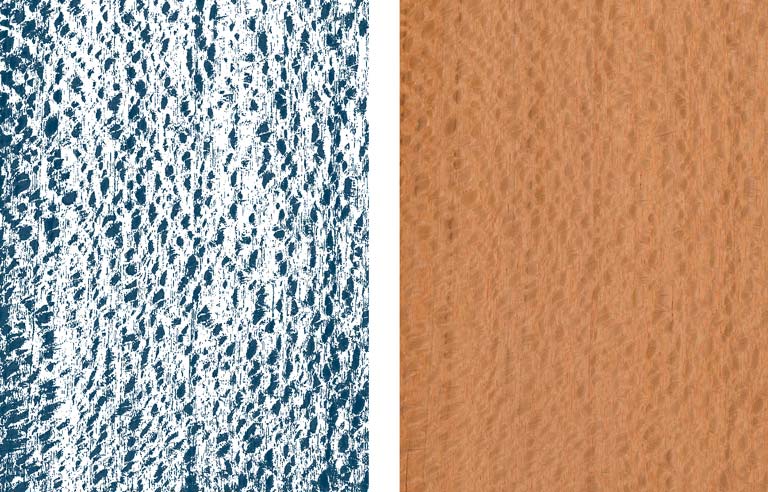 This figure only appears in species that have a very heavy medullary ray growth—Oak, Lacewood, and Sycamore, for example—and is the result of slicing close to parallel with the medullary ray. 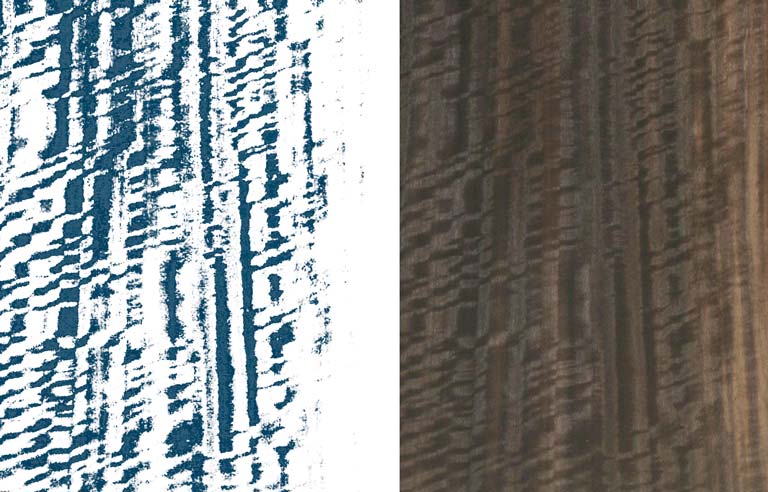 Mottle is a wrinkled, blotch marking across the grain that is produced when wavy grain combines with a spiral. Broad cross markings produce a block or checkerboard pattern called block mottle. A small, fine, cross marking produces bee's-wing mottle. The figure is common in Anegre, Makore, and Sapele, and may also occur in Mahogany, Koa, Bubinga, and Satinwood. 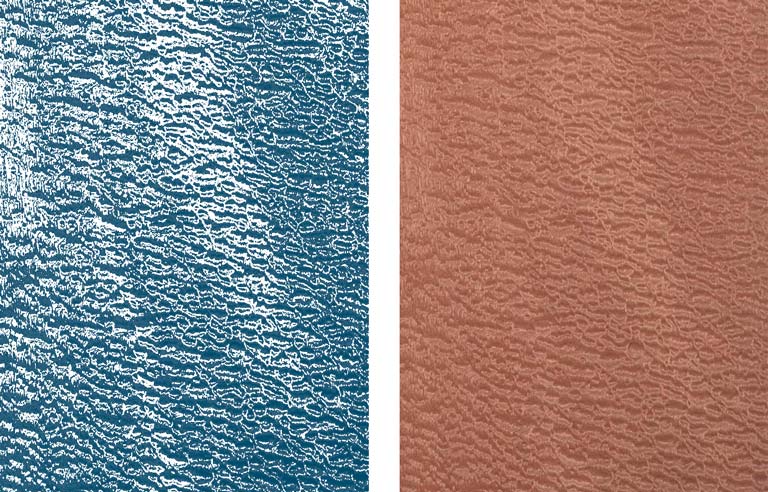 Peanut Shell occurs when quilted or blistered figured woods are rotary cut and produce a random, wild grain pattern. The figure appears bumpy and pitted, but is in fact flat. Tamo and Bubinga are the most common examples of this figure. 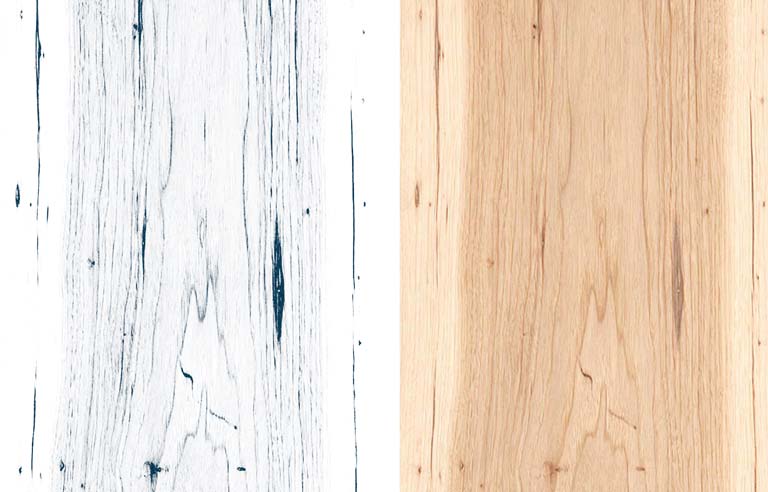 Pecky refers to elongated character markings caused by localized decay or infection of the growth rings, or as a result of localized injury (including bird pecks). They’re most evident when veneer is rotary cut following the growth rings and look somewhat like a sparse bird’s eye figure. 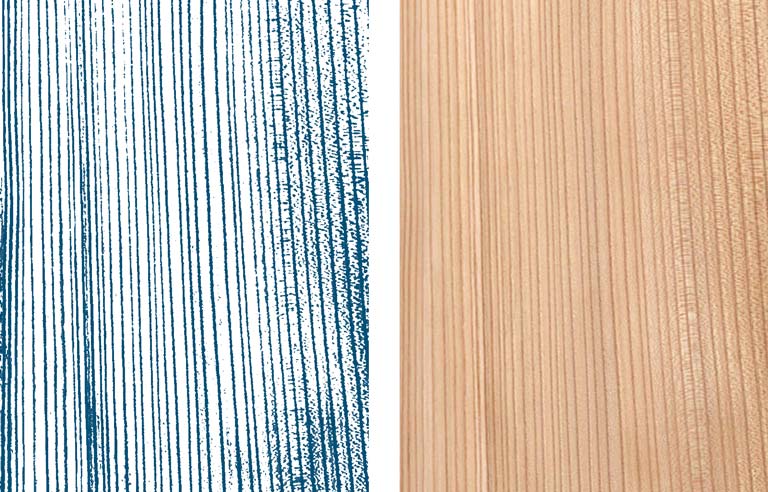 Plain Stripe refers to a straight, uniform, stripy effect with very little distortion. It's the result of quarter slicing veneer that has a porous structure running parallel with the grain. 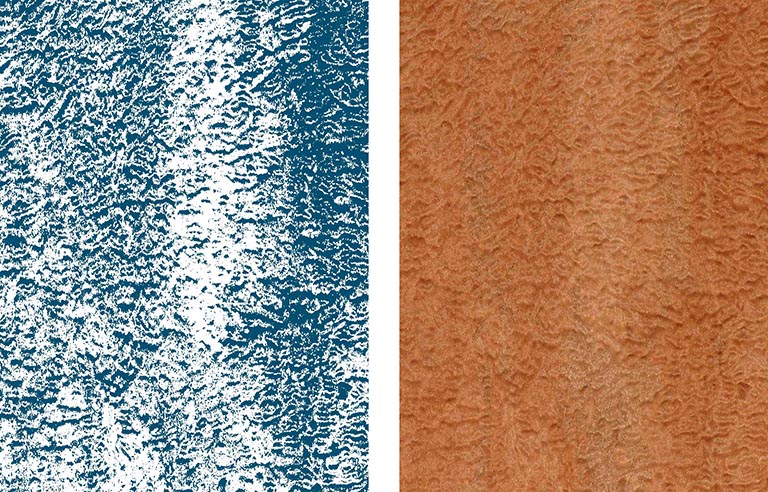 Pommele is a small blister figure appearing as tiny apples dappled across the surface of the veneer—or like rain on a puddle. Its name comes from the French word "pomme" for "apple." 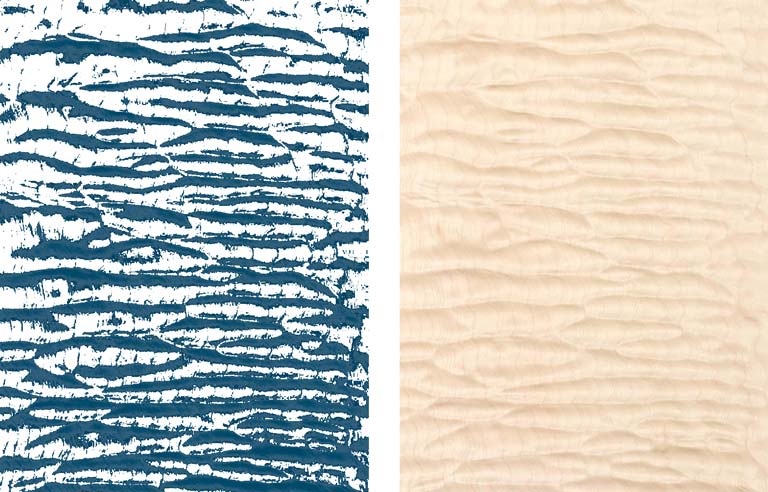 Quilted figure is a larger version of pommele or blister in which the blister is elongated and crowded, giving it a softly raised 3D effect. It is common in Maple, Mahogany, Moabi, and Sapele. 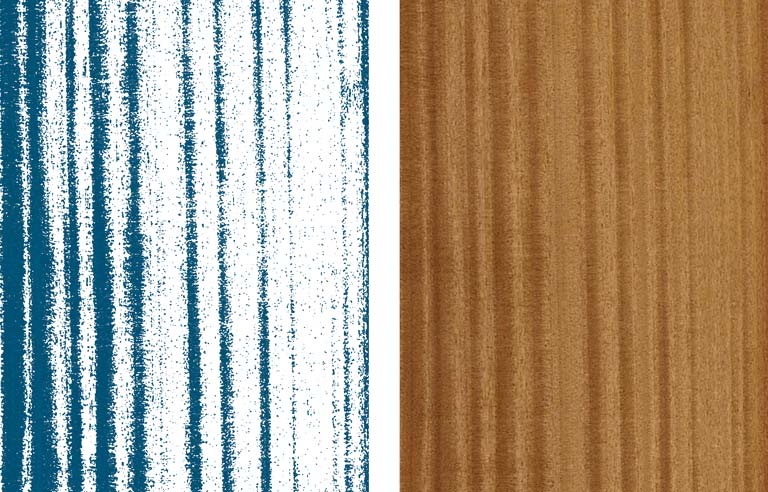 Ribbon Stripe appears as a slightly twisted ribbon—something between a broken stripe and a plain stripe—and is found in some quarter-cut veneers. 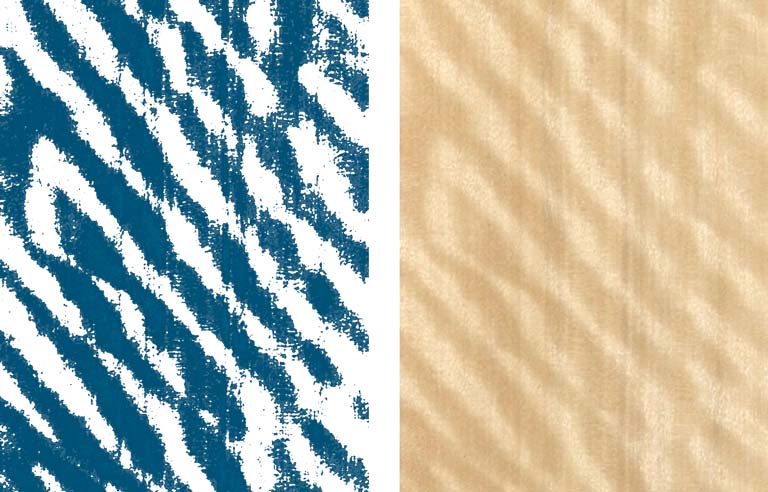 In this “broken stripe” figure, the twist of the grain is all in one direction, creating the appearance of a ropey figure. 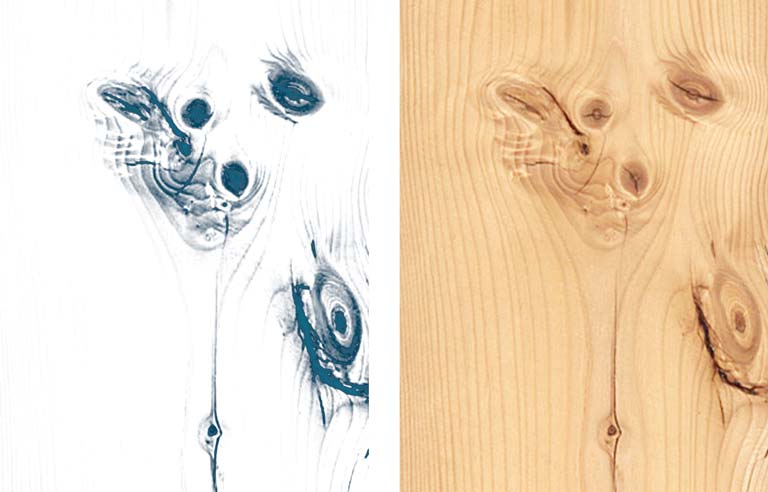 Rustic veneer refers to the appearance of natural marks and irregularities in the wood that are the result of a tree’s specie, growth pattern, and unique history. 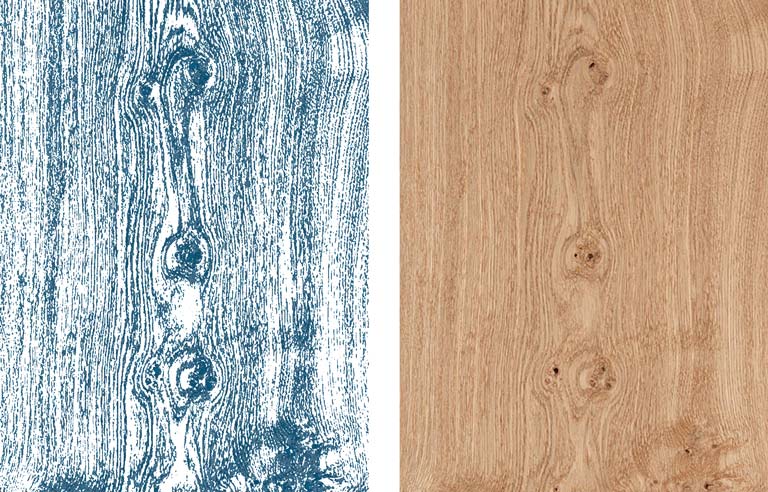 Vintage veneers are sliced from the reclaimed hand-hewn beams of old barns, farmhouses and other structures. This rustic looking veneer is intended for use in random matched sequences. 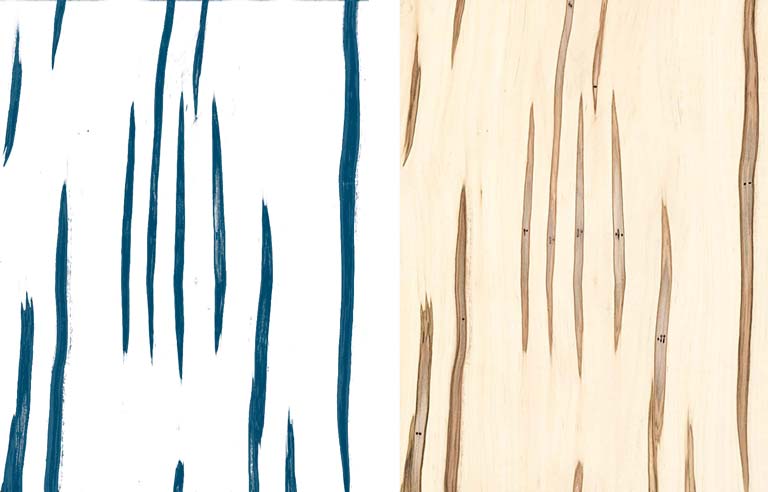 Wormy marks are numerous elongated "spots" interspersed where the wood has been eaten away by boring insects (generally beetles). Sometimes the hole is filled in by natural processes, leaving elongated, worm-shaped discolored areas. In many trees, wormholes are more likely in the sapwood than in the heartwood.